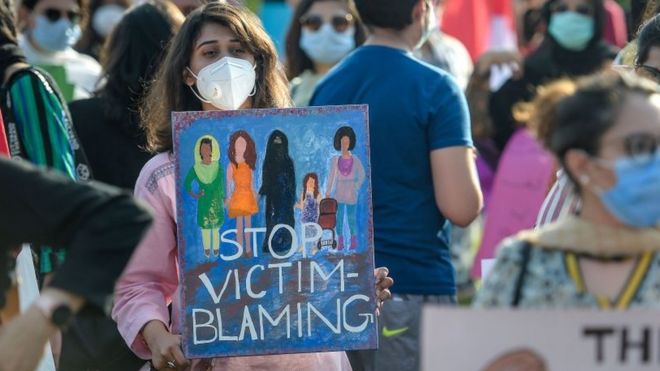 Mass protests have rocked all major cities across Pakistan

Pakistan is in shock after robbers gang-raped a woman in front of her children near a motorway. But in a country where sexual violence towards women is common, why has this incident caused people to come out onto the streets and demand change, asks the BBC's Saira Asher.

Women in Pakistan are often advised by family members or relatives not to be out late at night, or to make sure they have a male companion with them for their safety.

But when a top police official, charged with finding the attackers, implied the victim had been partly to blame for being out after dark alone, it ignited fury.

Comments that previously may not have been publicly questioned are now being called out as victim-blaming.

"Blaming the victim, judging a woman's character to determine whether she was a victim; these are rooted in our society for decades," says Moneeza Ahmed, who is part of a feminist collective.

"So the backlash is a sign that our society is listening, changing and a lot more women are speaking up."