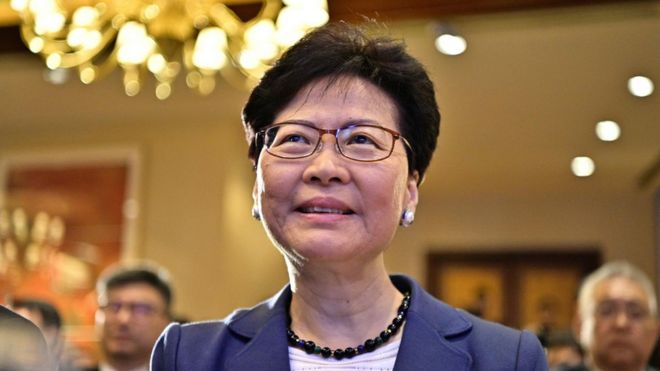 Carrie Lam, a skilled bureaucrat handpicked by Beijing to lead Hong Kong, has become one of
the most divisive figures in the politically turbulent city.

The chief executive sparked months of protests last year after proposing a law that would have
allowed extraditions to mainland China.

She warned protesters not to push Hong Kong into an "abyss" as the rallies grew into a mass
democracy movement even after the bill was withdrawn.

The city's first female leader went on to back the controversial national security law imposed on
Hong Kong by Beijing in June.

A long-serving civil servant
Ms Lam, a Roman Catholic, was born into a working-class family in Hong Kong.

The 63-year-old is often described as a "workaholic", regularly sleeping just three or four hours
a night.

She began her career in the civil service, joining as a fresh graduate from the University of
Hong Kong in 1980.

Two years later she was sent to the University of Cambridge to study for a diploma in Development
Studies. It's here she also met her future husband, the mathematician Lam Siu-por.

The first female leader
The former civil servant was sworn into office as chief executive by Chinese President Xi Jinping on
1 July 2017, the 20th anniversary of Hong Kong's return to Beijing.

In her acceptance speech she said: "Hong Kong, our home is suffering from quite a serious
divisiveness and has accumulated a lot of frustrations. My priority will be to heal the divide."

She reportedly never backs down in a political battle, threatening to resign if she does not get
her way. This tough stance has earned her the nickname the "good fighter" .


You can follow the details of this story here. : pgslot