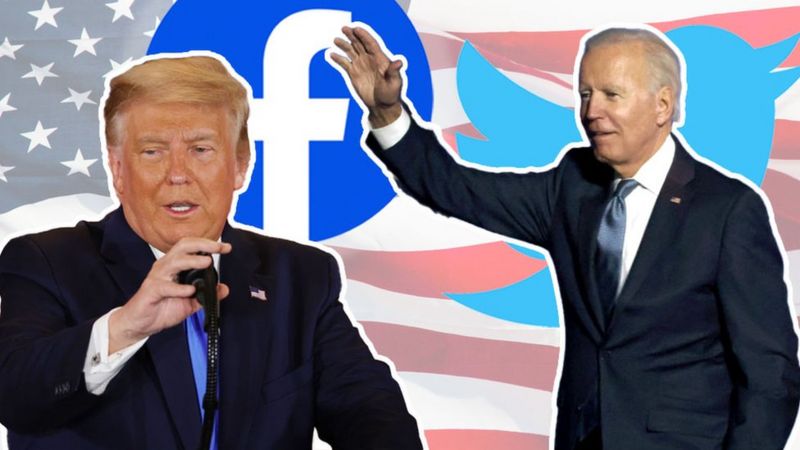 Twitter has hidden some of Donald Trump's first tweets the day after a US election which remains undecided.

In one, the President wrote his vote advantage in key Democrat-run states had "started to magically disappear",
and in another that 500,000 votes in key states were at risk.

The messages are now hidden behind warnings that say the claims are disputed and might be misleading.

The moves also limit users' ability to like and reply to the posts.

Twitter had earlier taken similar action over a post in which Trump said for the first time that his opponents
"are trying to steal the election".

Facebook has added fact-check boxes to some of the messages on Mr Trump's profile on its platform, clarifying that final
results might take longer than normal - but did not restrict engagement.

One of the tweets said: "Last night I was leading, often solidly, in many key states, in almost all instances Democrat run
and controlled.

"Then, one by one, they started to magically disappear as surprise ballot dumps were counted. VERY STRANGE."

He followed that with: "They are working hard to make up 500,000 vote advantage in Pennsylvania disappear - ASAP.
Likewise, Michigan and others!"

Twitter took just over half an hour to react on each occasion.

Mr Biden's first tweet of the day said "we won't rest until everyone's vote is counted".

Twitter has not acted on any of Mr Biden's tweets.

But it has hidden a post by the chair of Wisconsin's Democratic Party Ben Wikler who posted that
"Joe Biden just won Wisconsin".

On Tuesday, the Trump campaign claimed that "Silicon Valley continues its campaign to censor and silence the president". 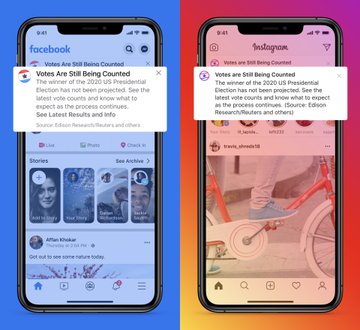 Facebook has also been automatically adding labels to all recent posts on Trump and Joe Biden's accounts.

They inform readers that votes are still being counted and that the winner of the US presidential election has not been
projected.

Facebook has begun placing notifications at the top of the timelines for all US users, explaining that the election had
not yet been decided.

"Once President Trump began making premature claims of victory, we started running notifications on Facebook and
Instagram that votes are still being counted and a winner is not projected," it said.

But the network appears to be allowing some claims of victory, despite warning that it would not.

An earlier tweet from Mr Trump that he had enjoyed "a big win!" has been left untouched, as has a carefully-worded
tweet from Mr Biden that said "we believe we are on track to win this election".